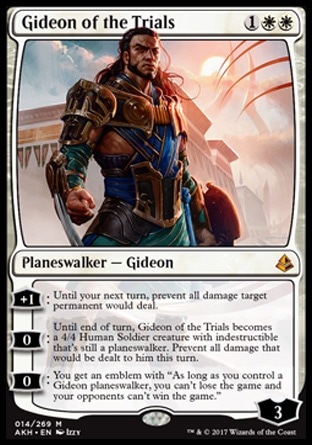 Gideon of the Trials

+1: Until your next turn, prevent all damage target permanent would deal.
0: Until end of turn, Gideon of the Trials becomes a 4/4 Human Soldier creature with indestructible that's still a planeswalker. Prevent all damage that would be dealt to him this turn.
0: You get an emblem with "As long as you control a Gideon planeswalker, you can't lose the game and your opponents can't win the game."

Gideon’s first ability will continue to prevent damage dealt by the target permanent even if Gideon leaves the battlefield before your next turn.
April 18, 2017
Gideon’s second ability doesn’t count as a creature entering the battlefield. Gideon was already on the battlefield; he only changed his types.
April 18, 2017
If Gideon becomes a creature the same turn he enters the battlefield, you can’t attack with him or use any of his {T} abilities (if he gains any).
April 18, 2017
Gideon’s second ability causes him to become a creature with the creature types Human and Soldier. He remains a planeswalker with the planeswalker type Gideon. (He also retains any other card types or subtypes he may have had.) Each subtype is correlated to the proper card type: planeswalker is only a type (not a creature type), and Human and Soldier are just creature types (not planeswalker types).
April 18, 2017
If damage that can’t be prevented is dealt to Gideon after his second ability has resolved, that damage will have all applicable results: specifically, the damage is marked on Gideon (since he’s a creature) and that damage causes that many loyalty counters to be removed from him (since he’s a planeswalker). Even though he has indestructible, if Gideon has no loyalty counters on him, he’s put into his owner’s graveyard.
April 18, 2017
If Gideon leaves the battlefield after giving you his emblem, you’ll keep the emblem. Its effect will apply again later if another Gideon comes under your control.
April 18, 2017
No game effect can cause you to lose the game or cause any opponent to win the game while Gideon’s emblem is in effect. It doesn’t matter whether you have 0 or less life, you’re forced to draw a card while your library is empty, you have ten or more poison counters, you’re at your Glorious End, your opponent casts a second Approach of the Second Sun, or so on. You keep playing.
April 18, 2017
Other circumstances can still cause you to lose the game. You will lose a game if you concede, if you’re penalized with a Game Loss or a Match Loss during a sanctioned tournament due to a DCI rules infraction, or if your Magic Online® game clock runs out of time.
April 18, 2017
If you have Gideon’s emblem in a Two-Headed Giant game and control a Gideon planeswalker, your team can’t lose the game and the opposing team can’t win the game. If your teammate controls a Gideon planeswalker but you do not, your emblem’s effect doesn’t apply.
April 18, 2017