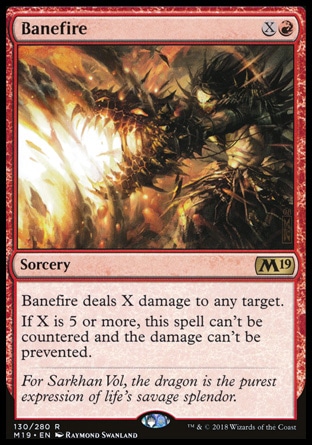 Banefire deals X damage to any target.
If X is 5 or more, this spell can't be countered and the damage can't be prevented.

For Sarkhan Vol, the dragon is the purest expression of life's savage splendor.

To determine whether it can be countered and its damage can be prevented, Banefire checks the number you chose for X, not the amount of mana you actually spent or the amount of damage it will actually deal.
July 13, 2018
Banefire can be targeted by spells that try to counter it regardless of what the value of X is. If X is 5 or more, those spells will still resolve, but the part of their effect that would counter Banefire won't do anything. Any other effects those spells have will work as normal.
July 13, 2018
If its target is illegal by the time Banefire tries to resolve, the spell isn't countered, but it doesn't resolve. The target won't be dealt damage.
July 13, 2018