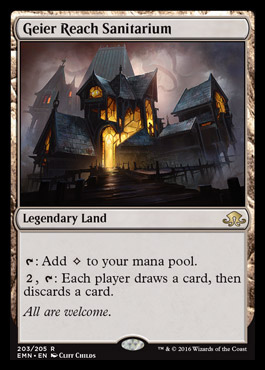 When you activate Geier Reach Sanitarium's last ability, first each player draws a card. Then the player whose turn it is selects a card from his or her hand and sets it aside without revealing it; proceeding in turn order, each other player does the same. Then the cards that were set aside are discarded at once.
July 13, 2016
If more than one player discards a card with madness simultaneously, the player whose turn it is puts his or her madness abilities onto the stack first, then each other player does the same in turn order. The last one put onto the stack resolves first, and a spell cast this way will resolve before resolving the next madness ability.
July 13, 2016