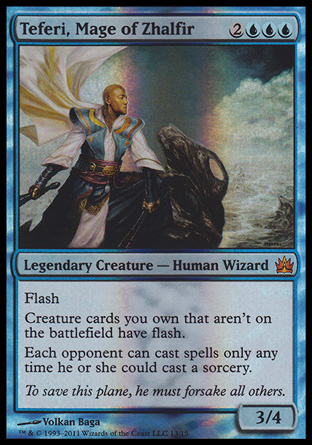 Flash (You may cast this spell any time you could cast an instant.)
Creature cards you own that aren't on the battlefield have flash.
Each opponent can cast spells only any time he or she could cast a sorcery.

To save this plane, he must forsake all others.

The last ability means that in order for an opponent to cast a spell, it must be that opponent's turn, during a main phase, and the stack must be empty. This is true even if the player doesn't have a sorcery he or she is able to cast, or if a rule or effect allows a spell to be cast at another time.
September 25, 2006
If you have Teferi on the battlefield, you may exile creature cards in your hand with suspend any time you could cast an instant.
September 25, 2006
If an ability lets an opponent cast a spell as part of its effect (such as Isochron Scepter's ability does), that opponent can't cast that spell since the currently resolving ability is still on the stack.
September 25, 2006
Your opponents can't cast their suspended cards, no matter what phase it is when the last time counter is removed. Your opponents can't cast cards using the madness ability either, no matter what phase it is when the card is discarded.
September 25, 2006
If you have Teferi on the battlefield and there's a Split Second spell on the stack (such as Sudden Death), you can't Suspend creatures until after the Split Second spell resolves.
May 1, 2007