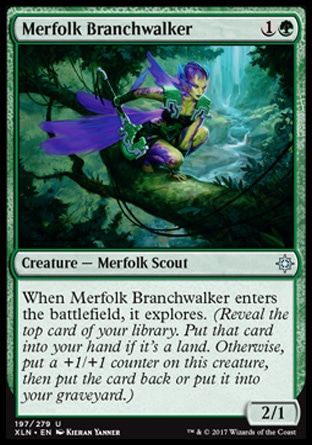 When Merfolk Branchwalker enters the battlefield, it explores. (Reveal the top card of your library. Put that card into your hand if it's a land. Otherwise, put a +1/+1 counter on this creature, then put the card back or put it into your graveyard.)

Once an ability that causes a creature to explore begins to resolve, no player may take any other actions until it's done. Notably, opponents can't try to remove the exploring creature after you reveal a nonland card but before it receives a counter.
September 29, 2017
If no card is revealed, most likely because that player's library is empty, the exploring creature receives a +1/+1 counter.
September 29, 2017
If a resolving spell or ability instructs a specific creature to explore but that creature has left the battlefield, the creature still explores. If you reveal a nonland card this way, you won't put a +1/+1 counter on anything, but you may put the revealed card into your graveyard. Effects that trigger "whenever a creature you control explores" trigger if appropriate.
September 29, 2017