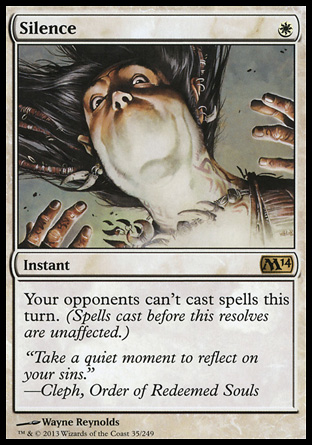 Your opponents can't cast spells this turn. (Spells cast before this resolves are unaffected.)

"Take a quiet moment to reflect on your sins."—Cleph, Order of Redeemed Souls

Silence won't affect spells that your opponents cast before you cast Silence. (In other words, it can't be used as a retroactive Cancel.) Silence also won't stop your opponents from casting spells after you cast Silence but before Silence resolves.
October 1, 2009
The only thing Silence does is prevent your opponents from casting spells. They can still activate abilities, including abilities of cards in their hands (like cycling). Their triggered abilities work as normal, they can still play lands, and so on.
October 1, 2009