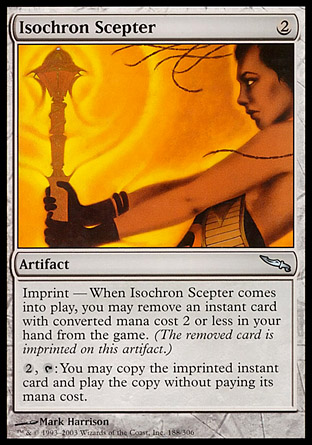 Imprint — When Isochron Scepter enters the battlefield, you may exile an instant card with converted mana cost 2 or less from your hand.
{2}, {T}: You may copy the exiled card. If you do, you may cast the copy without paying its mana cost.

If the imprinted card leaves the exile zone while the activated ability is on the stack, the copy can't be made.
June 8, 2016
If Isochron Scepter leaves the battlefield while the activated ability is on the stack, the ability can still make a copy.
June 8, 2016
You cast the copy while the ability is resolving and still on the stack.
June 8, 2016
Because you're already casting the spell using an alternative cost (by casting it without paying its mana cost), you can't pay any other alternative costs for the card. You can pay additional costs, such as kicker costs. If the card has any mandatory additional costs, you must pay those.
June 8, 2016
If the exiled card has X in its mana cost, you must choose 0 as the value for X when casting it.
June 8, 2016
You may exile a split card while resolving Isochron Scepter's imprint ability if either half has a converted mana cost of 2 or less. When you activate the second ability, you may choose to cast either half of the split card, even if one half has a converted mana cost greater than 2, but you may not cast both halves.
June 8, 2016
If you don't want to cast the copy, you can choose not to; the copy ceases to exist the next time state-based actions are checked.
June 8, 2016