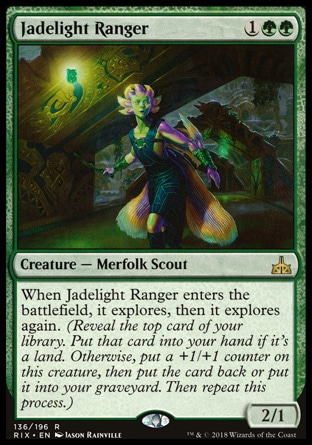 When Jadelight Ranger enters the battlefield, it explores, then it explores again. (Reveal the top card of your library. Put that card into your hand if it's a land. Otherwise, put a +1/+1 counter on this creature, then put the card back or put it into your graveyard. Then repeat this process.)

If you reveal a nonland card the first time Jadelight Ranger explores and leave it on top of your library, you'll reveal the same card the second time it explores. If you don't pretend to be surprised, you'll hurt Jadelight Ranger's feelings.
January 19, 2018
Once an ability that causes a creature to explore begins to resolve, no player may take any other actions until it's done. Notably, opponents can't try to remove the exploring creature after you reveal a nonland card but before it receives a counter.
January 19, 2018
If no card is revealed, most likely because that player's library is empty, the exploring creature receives a +1/+1 counter.
January 19, 2018
If a resolving spell or ability instructs a specific creature to explore but that creature has left the battlefield, the creature still explores. If you reveal a nonland card this way, you won't put a +1/+1 counter on anything, but you may put the revealed card into your graveyard. Effects that trigger "whenever a creature you control explores" trigger if appropriate.
January 19, 2018